There's nothing more American than helping your fellow Americans!

Witness crazy moments followed by a comedic investigation in front of your audience.

Have a comedy performance created on the spot with your audience along for the ride.

Have a magical evening with a combination of close-up and stage performances. 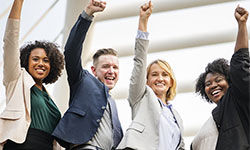 Have audience members cheer on some of their own as they strive to win!

Have traditional comedians come and entertain your audience while emceeing your event.

THEY improv provides improv comedy, game shows and murder mystery dinners for fundraising for a variety of charities. We serve to benefit the communities that we provide corporate entertainment options for and try to make a difference where we can.

For us, it's a matter of identifying that raising funds and awareness to local charities can make all the difference.Country clubs often work to raise funds for area charities. For these efforts, THEY improv works with country clubs at providing a variety of entertainment options that can raise money. It is important to understand the issues involved and know how to work with these country clubs and find the best way to advance the charities involved.

Country clubs will often hold golf tournaments and other similar activities for their members to raise funds for charity. This can be a shotgun tournament or celebrity event, but the needs to have the players entertained, or even options for the dinners that follow the tournaments.

We have a variety of murder mystery shows for charity fundraising. With a cast of detectives, quirky suspects and plots customized to each group at a venue of your choosing for a luncheon or dinner show, THEY improv will have your group trying to discover whodunit while laughing the night away.

The key, of course, is to make certain that the charity comes out ahead. This means that the event should make money, get publicity and gain positioning for the future. So you should choose the most appropriate approach for you.

For larger banquets we provide 4-7 actors who come to your venue with a fun theme including possibly a wedding, mobsters or even being in a speakeasy.

For medium sized groups, we have the Cambridge Solution allowing for a few of your people to play characters, with these stars competing to be the best actor. Of course these are often the officers of the country club.

For smaller groups, we have a game show version where the participants play all the characters in a mix and mingle party designed to get people to talk to each other and have a great time in a no-pressure environment.

Improvisational comedy or game shows are great ways to provide entertainment and have the feeling of a more traditional show. This would usually go for 30-45 minutes for a game show or 45-60 minutes for improv comedy starting at the beginning of dessert.

For more information about having a charity fundraiser at your country club, contact us by email at info@CountryClubImprov.com or by calling (866) 219-4386.